Livestreaming a Dialog: NO SUMMARY: Critiquing the Critics 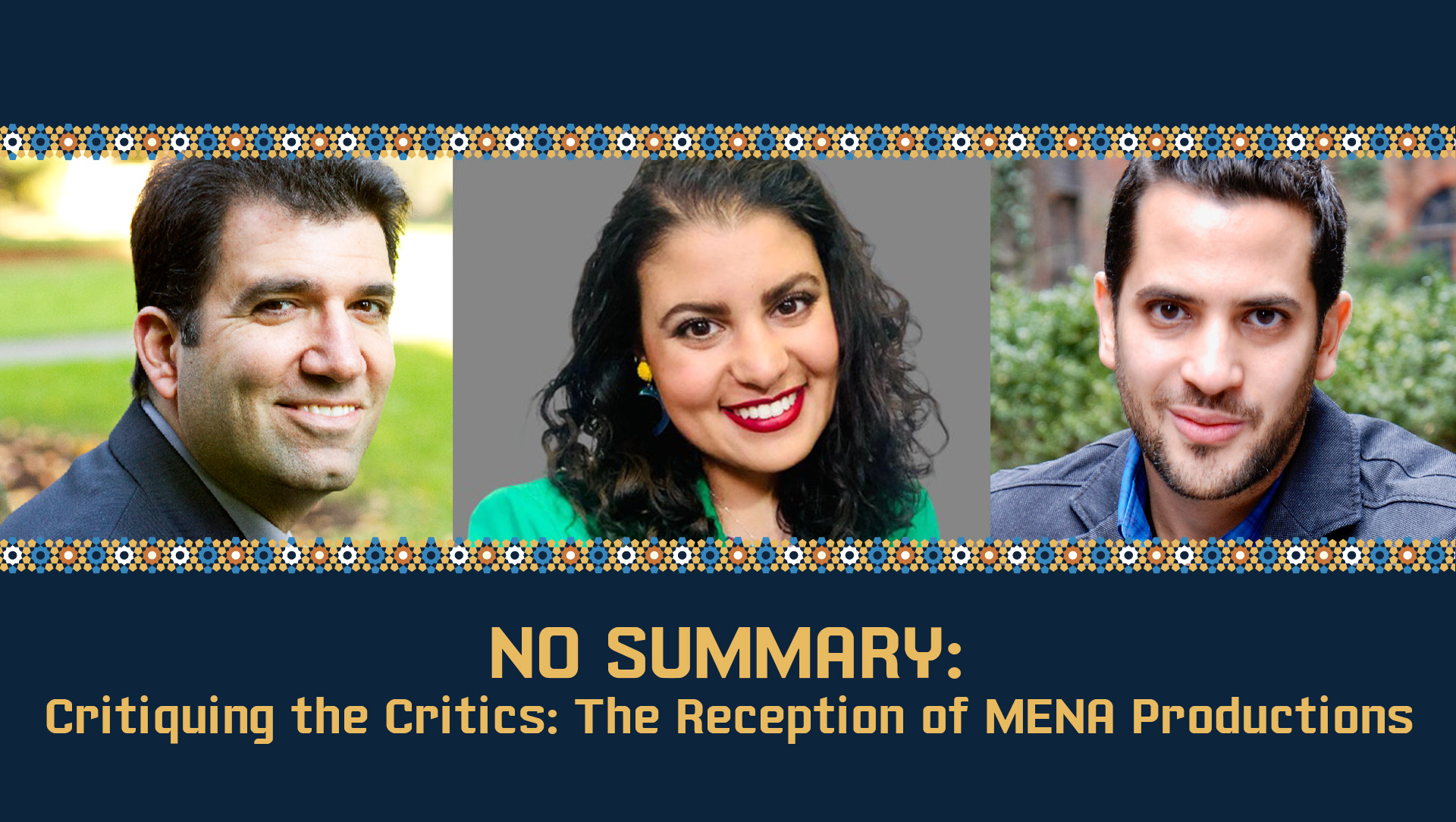 Golden Thread invitations Sarah Fahmy, a scholar and devising artist to reasonable a dialog on the reception of MENA productions within the U.S. at the moment with Kareem Fahmy, a theatre director, playwright, and screenwriter whose work is produced at nationally acclaimed theatre corporations this 12 months, and Malek Najjar, a director, playwright, and scholar of Arab American and Center-Japanese American theatre and Affiliate Professor of Theatre Arts on the College of Oregon. When Center Japanese North African tales are always subjected to the white gaze and are carried out in entrance of a predominantly white-US viewers, how do MENA artistic groups grapple with an genuine illustration of their artistry, languages, and cultures?

This dialog is produced and hosted by Golden Thread Productions in collaboration with the MENATMA convening happening on the Arab American Nationwide Museum, November 10-12, 2022.

Sarah Fahmy (moderator) is a decolonial scholartist, who works on the intersection of efficiency and identification politics, Arab and North African theatres, and eco-feminism. She is a co-founder and Chair of the Center Japanese Theatre focus group on the Affiliation of Theatre in Greater Training, and the co-chair of the MENATMA programming subcommittee. A Ph.D. candidate in Theatre and Efficiency Research and member of the Little one Language Studying Lab on the College of Colorado Boulder, Sarah’s dissertation presents a foundational theoretical praxis for supporting younger Egyptian girls authors and embodying their decolonial feminist identities. Sarah has devised multi-disciplinary site-specific items and facilitated utilized efficiency and Playback residencies with a whole bunch of members internationally, starting from artistic local weather communication with scientists to co-created workshops with youth for the UN Fee on the Standing of Ladies and the Egyptian authorities. Sarah has spearheaded anti-racist university-wide restructuring, because the President of the Graduate and Skilled Pupil Authorities, the Middle for Educating and Studying Theatre Lead Teacher, and the co-artistic producer of the New Play Competition, and by creating the primary college library database devoted to MENA girls playwrights. Her publications seem in a spread of journals and books starting from Theatre Subjects to PloS One.

Malek Najjar (Panelist) is an Affiliate Professor of Theatre Arts on the College of Oregon. He’s a director, playwright, and scholar of Arab American and Center-Japanese American theatre. His printed works embrace Center Japanese American Theatre: Communities, Cultures and Artists and Arab American Drama, Movie and Efficiency: A Vital Research: 1908 to the Current. He has edited 4 Arab American performs: Works by Leila Buck, Jamil Khoury, Yussef El Guindi, and Lameece Issaq & Jacob Kader; The Chosen Works of Yussef El Guindi; and Heather Raffo’s Iraq Performs: The Issues That Can’t Be Mentioned. He has co-edited The Vagrant Trilogy: Three Performs by Mona Mansour (with Hala Baki) and Six Performs of the Israeli-Palestinian Battle (with Jamil Khoury and Corey Pond). He has directed productions with Silk Highway Rising, Golden Thread Productions, and New Arab American Theatre Works. Malek is an alumnus of the RAWI Screenwriters Lab/The Royal Movie Fee Jordan, Administrators Lab-Lincoln Middle Theater, and Administrators Lab West. He was awarded the College of California Eugene V. Cota-Robles Fellowship, the Ernest G. Moll School Analysis Fellowship in Literary Research, the Fund for School Excellence Award, and Certificates of Advantage for Directing from the Kennedy Middle/American Faculty Theatre Competition.