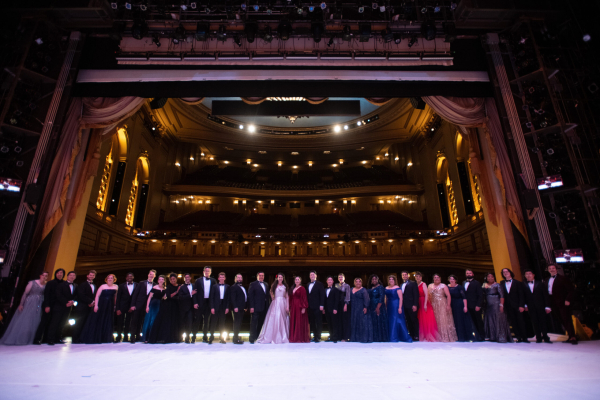 * Notes *
The Merola Grand Finale (pictured, {photograph} by Kristen Loken) returned to the Battle Memorial Opera Home final night time for the primary time since 2019. It was a pleasure to listen to all these proficient singers in individual and within the opera home.

The stage was easy, mainly three white screens and completely different coloured lights for the assorted scenes. Solely the duet “Vogliatemi bene” from Act I of Madama Butterfly had some static projections that appeared like raindrops or petals. Matthew J. Schultz’s stage route had enchantment, it was direct and unfussy.

I favored how mezzo-soprano Nikola Printz as Kitty Oppenheimer interacted with bass-baritone William Socolof of their aria “Am I in your Gentle?” (from Dr. Atomic) although he didn’t sing. It made sense to have Socolof play J. Robert Oppenheimer, and Printz did very effectively with each singing and performing. Additionally fascinating was Schultz’s option to have the Card Trio from Carmen begin with solely Frasquita and Mercédès onstage, after which have Carmen be part of solely later.

Whereas there have been many robust arias, equivalent to countertenor Cody Bowers singing “D’un sventurato amante…Pena tiranna” from Handel’s Amadigi di Gaula and bass-baritone Le Bu in Verdi’s “O tu Palermo,” probably the most spectacular had been the duets. Singers had been well-matched and sang items properly suited to their talents. “Pay attention, Mary, belief me!” from Freeway 1, U.S.A. by William Grant Nonetheless was sweeping and delightful when sung by soprano Adia Evans and baritone Scott Lee. Soprano Maggie Kinabrew as a spunky Adina with bass-baritone Seungyun Kim as a really foolish Dulcamara had been charming in “Quanto amore!” Strongest of all within the first half of the night although was undoubtedly soprano Amanda Batista and tenor Moisés Salazar in “Vogliatemi bene,” the uncooked energy but complete ease of their voices was arresting. They blended their sounds properly as effectively.

Within the second half, I discovered soprano Ariana Rodriguez and tenor Likelihood Jonas-O’Toole very lovable in “Tornami a dir che m’ami” from Donizetti’s Don Pasquale. Rodriguez has some pretty resonances to her voice and Jonas-O’Toole is distinctive, heat and woodwind-like. Additionally notable was the Puccini duet from La bohème “Dunque è proprio finita” with soprano Adia Evans and tenor Daniel Luis Espinal which was vivid and really loud. As I am a ridiculous fan of Gounod’s Faust, I used to be very glad to listen to soprano Chelsea Lehnea and bass-baritone Seungyun Kim sing “Alerte! Alerte!” with tenor Moisés Salazar performing the a part of the title character.

*Tattling *
It was enjoyable seeing all of the supporters of Merola that we have missed within the final two years, even when it was behind masks.

There was a bit of sunshine speaking every now and then, and somebody’s listening to aids made loads of squeaky sounds through the efficiency. I need to say I wasn’t too irritated by it, as I had kind of forgotten this might be a problem in spite of everything these months of pandemic precautions and staying inside. In a manner I am grateful to have the ability to even hear these high-pitched sounds nonetheless.